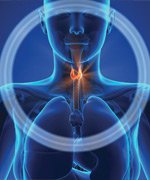 There are three main underlying causes of suboptimal thyroid function:
Insufficient production of the thyroid hormone T4
Decreased conversion of T4 to T3 (T3 is the most active form)
Increased production of inhibitory rT3 (reverse T3) that blocks normal thyroid function
A multifaceted problem requires treatment or prevention with multitargeted therapies.
Scientists have found that a combination of nutrients can address the three main contributors to suboptimal thyroid function with a triple-action approach. Preclinical and clinical research indicates:
Ashwagandha increases levels of the thyroid hormones T3 and T4.23-26
Guggul, an extract of Commiphora mukul, enhances conversion of T4 to T3.27,28
An extract of Korean ginseng reduces concentrations of inactive, thyroid hormone-inhibiting rT3.29
Thyroid Hormone Blood Testing
Life Extension® offers a new Thyroid Panel that includes TSH, total T4, free T3, free T4, and reverse T3.
These tests can identify the most common reasons for thyroid insufficiency. There are other thyroid tests available, but for most people, the new Thyroid Panel with Reverse T3 will detect the underlying causes of thyroid deficiency.
The retail price of this new Thyroid Panel with Reverse T3 is $160. Until February 1, 2016, the price has been reduced to $94.
Those with outward symptoms of a thyroid deficiency might consider initiating a nutrient-based approach first, then having their blood drawn for this new thyroid panel within 45 days. This would enable the individual and their physician to ascertain if additional thyroid support measures are needed.
While you might wait until January 2016 to have your blood drawn for this Thyroid Panel with Reverse T3 panel, it is good to have the requisition and list of local blood draw stations on hand so you can have this test done at your convenience. To order this test today at more than 40% off normal pricing, call 1-800-208-3444.
Ashwagandha Boosts T3 and T4

Ashwagandha , a shrub grown in India, has a long medicinal history as an “adaptogenic” herb. Adaptogens have been utilized by traditional medicine to restore balance to the body.30
Modern scientific techniques are revealing some of ashwagandha’s benefits that specifically apply to improving thyroid function. Ashwagandha supports thyroid function, in part, because it contains glyco-withanolide bioactive compounds that reduce stress and cortisol levels. Along with reducing stress hormones, the root extract of ashwagandha has been shown in preclinical studies to increase serum concentrations of T3 and T4.25,26
In an early animal study, mice were given ashwagandha root extract orally and their thyroid hormone levels were monitored. This treatment increased T3 by 18% and T4 by 111%, after just 20 days.31
Human studies are supporting this finding. In one study, a subset of patients (10 of the 60 subjects) showed evidence of suboptimal thyroid function along with bipolar disorder at the baseline start of the study.32 The patients were treated with 500 mg daily of ashwagandha. At the end of the two-month treatment period, all of the patients receiving ashwagandha saw an improvement of TSH. Their T4 levels also increased from baseline by up to 24%.32
In the placebo subjects not supplemented with ashwagandha, T4 levels dropped from baseline by as much as 23%, showing a significant decline in thyroid function. One unsupplemented patient’s TSH rose into the abnormal range, suggesting a worsening of thyroid function.
This study indicated that ashwagandha therapy can be a factor in improving the thyroid hormone T4 along with adjusting TSH levels.32
Another mechanism by which ashwagandha supports and restores healthy thyroid function may be through its reduction of the stress hormone cortisol. People with thyroid diseases in general have elevated rates of depression and anxiety and other stress-related disorders. Elevations of cortisol and stress increase reverse T3 (rT3), which interferes with T3’s beneficial activities.33
As an adaptogen, ashwagandha is particularly effective at combatting stress because of its ability to restore balance in metabolism and body functions.34 A human study of people with known chronic stress demonstrated that daily supplementation with 300 mg of ashwagandha (high-concentration, full-spectrum root extract), significantly lowered both scores on a stress assessment scale and serum cortisol levels. As the study’s authors concluded, “ The findings of this study suggest that a high-concentration full-spectrum ashwagandha root extract safely and effectively improves an individual’s resistance towards stress and thereby improves self-assessed quality of life .”34
Guggul Extract Increases T3 Hormone