TRT May Reduce Mortality Without Improving CV Health in Diabetes 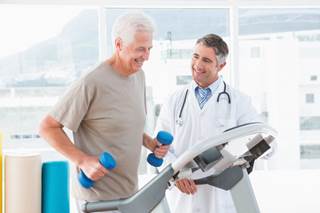 Testosterone replacement therapy (TRT) may reduce the risk for early mortality in men with type 2 diabetes. However, this potential benefit does not stem from improvement in conventional cardiovascular risk factors, according to new study findings published in BJU International.

Investigators led by Geoffrey Hackett, MD, of University Hospitals Birmingham NHS Foundation Trust in the UK, examined mortality in 857 men with type 2 diabetes who were screened for the BLAST (Burntwood Lichfield Atherstone Sutton Tamworth) randomized controlled trial. The men were divided into various groups for analysis. Group 1 had normal testosterone levels: total testosterone (TT) more than 12 nmol/L and free testosterone (FT) more than 0.25 nmol/L. Group 2 had low testosterone: TT 12 nmol/L or less or FT 0.25 nmol/L or less. Hypogonadal group 2 patients were further stratified into those not on TRT (group 2a) and those on TRT (group 2b). Finally, TRT users in group 2b were subdivided by whether TRT was discontinued (group 2b1) or not (group 2b2).
Based on Cox regression analyses, men with normal testosterone levels (group 1) or taking TRT (group 2b) had lower mortality than hypogonadal men not taking TRT (group 2a) over 3.8 years of follow up. Notably, this survival advantage persisted after adjustment for cardiovascular (CVD) risk factors including body mass index (BMI), glycated haemoglobin (HbA1c) levels, blood pressure, and lipids. Men from groups 1 and 2b who were older than 64.6 years and weighed 93.8 kg or less had the greatest reduction in mortality.

TRT users had lower mortality than non-users even when they discontinued therapy. Mortality was 0% (group 2b2) and 6.2% (group 2b1) compared with 16.9% in nonusers (group 2a).

Mean duration of TRT treatment was 12.7 months. Testosterone undecanoate was the initial therapy, with some men later switching to gel preparations. The investigators performed additional analyses to rule out any contributions from phosphodiesterase type 5 inhibitor (PDE5) inhibitors.

“The present study has many important findings that further our understanding of the benefits associated with TRT,” Dr Hackett and his team wrote. “The analyses carried out suggest that the reduction in mortality is not accounted for by improvements in CVD risk factors.”

They also noted: “The reduced mortality associated with TRT may last many years after discontinuation of treatment. We have shown that the greatest benefit in terms of reduction of all-cause mortality may be in older men, although we would not recommend restricting TRT to this group purely on the basis of lifetime risk reduction.”