Testicular Cancer and a Ballsy Sense of Tumor - Brilliant or Insane 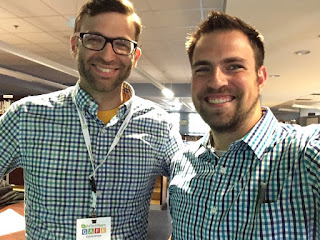 635
Shares
One of the smartest and coolest young teachers I know recently discovered he has testicular cancer. You may be thinking there’s nothing funny about cancer, and you’re right. For Justin Birckbichler, though, a lump on his testicle not only turned his life upside down, it also helped him develop him a “Ballsy Sense of Tumor.”
What exactly does this mean? Basically, Justin is on two journeys: One is filled with long chemotherapy sessions and a lot of nastiness that accompanies them; the other is an incredible story that this 25-year-old teacher is telling the world.
Justin recently shared his discovery and his journey, or journeys, with me on the Hack Learning Podcast . He also shared the post from his powerful new blog, chronicling the quest for a testicular cancer cure — A Ballsy Sense of Tumor .
The Discovery
By Justin Birckbichler
Friday, October 7th was field day. It was a fun time, and I even participated in many of the activities with my students. The glory of capture the flag and beating my principal, Brian, in a tire relay buoyed my spirits. Talk about making a good impression at my new school – by destroying Brian in front of my whole class and numerous parent volunteers. It was also a half day that day, which worked out well.
After the students were released, I left school quickly. I had a flight to catch to Kentucky for my first ever shadow event for an EdTechTeam Google Educator Bootcamp. Not only would I be part of this event, but I would also be shadowing my Google for Education Certified Innovator mentor, which was the first time I would meet Donnie. Between field day, the early release, the excitement of the Bootcamp and meeting Donnie, I thought it was going to be such an incredible weekend.
Meeting Donnie. I swear the shirts were unplanned.
How wrong I was. I don’t often fly, but 2016 has been the year I have traveled most. When I booked my flights for the Bootcamp, I chose what I thought was the closest airport. I was mistaken. However, I didn’t discover this until 10 minutes to departure at my gate in Dulles, the airport I was flying out from. Clearly, listening to an audiobook and chowing down on some Chipotle took precedence over verifying distances.
I discovered that the airport was 25 miles from my hotel, and the hotel was 90 miles from the Bootcamp. Rightfully so, I started freaking out. Luckily, Mari (one of my friends) and Donnie helped me to settle down and get arrangements made. I knew making it to the Bootcamp would require lots of driving, but in the end, it would be worth it. The weekend started looking up.
Text “@selfexam” to 81010 for monthly reminders
to do a self check
Just kidding – my luck only got worse in the morning. As I was showering, I felt a suspicious lump in my left testicle. (As an aside here, the word testicle is funnier to me than ball or nut or any common vernacular, but I’m trying to be professional here).
I knew the routine for self-checks.* They’re best done after a shower when the scrotum is relaxed, and they’re pretty easy: just place your index and middle fingers under the testicle with your thumb on top. Firmly but gently, roll the testicle between your fingers. Any weird lumps or bumps should be checked out by a doctor. I knew the drill.
I had grown rather attached to my testicles over the past 25 years (well, they were more attached to me) so, as I stood there in the shower, I knew something didn’t feel quite right.
This wasn’t the first time I had felt it either. In mid-September, in a similar showering episode, I had felt what felt to be a pea-sized hard lump. I thought back to my annual checkup (which I had neglected this year) and how the doctor always described lumps as something to take seriously. What I was feeling seemed to fit the bill.
I told my fianceé, Mallory, about it, and she started getting a little anxious. Rightfully so, since the prior year, she had gone through a similar scare after finding a lump in her breast. It shook her to her core, but luckily it was determined to be something other than a tumor and she had it removed.
Of course, I thought of that moment again on that fateful October morning in Kentucky. This time, as I checked myself in the shower, I definitely felt something, and it was bigger than I remembered. Whereas in September, it was one small pea-sized lump, this felt larger.
There also seemed to be more areas of concern. For lack of a better way to describe it, think of a jellyfish wrapped around a rock (or, for you sci-fi fans, a face-hugger alien).
Now, just a few short weeks later, that’s what it felt like around my left testicle. I knew I couldn’t put this issue off any longer….
On Thursdays, Justin is chronicling my testicular cancer journey from discovery of testicular cancer to the beginning of chemotherapy. This is the first post in the series; read the rest .
*Regular self-checks are the main way testicular cancer is detected early in men. It may be awkward to tell a guy in your life to “Go play with yourself,” but it could save their life. Please take a moment to share this post with as many men (of any age) as you know. Like I said, I felt perfectly healthy, and the only indication that something was wrong was the lump. This may help them to think about it more seriously. Leave their reactions in the comments below.
The following two tabs change content below.