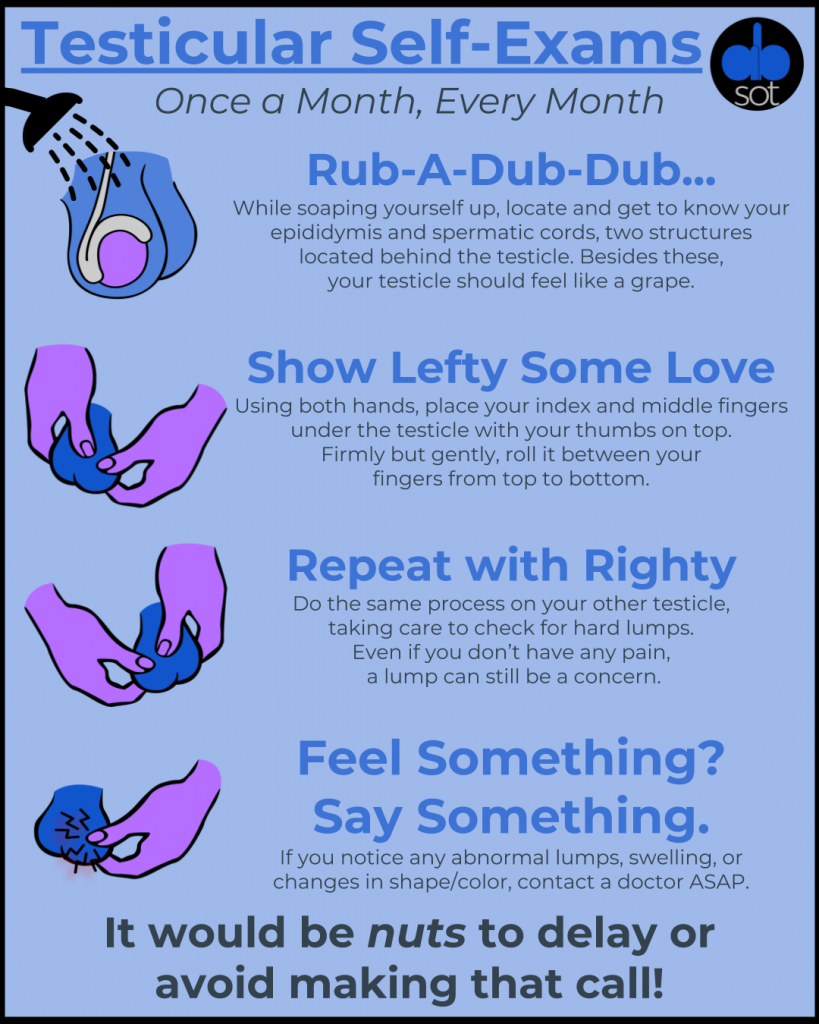 This is probably a big part of why traditional therapy didn’t work for me when I tried a few sessions back in April. That, and I’m not sure what to do on that couch – do I lay down, sit up, or what? I usually settled for an awkward lounge position.

Don’t get me wrong – my therapist was great and she gave me a lot of good advice.

However, she had never experienced cancer first hand, let alone testicular cancer, which isn’t too surprising, considering she has even fewer testicles than me.

Despite stopping my in-person therapy sessions back in June, I knew I still needed to mentally process what I had gone through. Luckily, the Movember Foundation suggested I try a program called eTC Express, which I recently completed. I believe that eTC is an acronym for “Eradicated Testicle Counseling,” though it could just be similar in name to email. The best part? It’s online and self-paced, so I don’t have to talk to other people.

That being said, I don’t want you thinking that the human element is completely gone from this therapy. It’s not like I’m Matthew Broderick in War Games and communicating with a server somewhere. There are real people behind the scenes and woven throughout the program (more on this in a bit).

When you begin eTC Express, you take a pre assessment to determine your current needs. Since my biggest concerns were fear over recurrence, general anxiety in life, and difficulty relating to others (see above desire to just communicate through texts and email), I definitely qualified as a strong candidate for this program. (For more in-depth information, you can visit the FAQ page.)

There are six modules in total: Foundations, After Treatment, Changes, Being A Man, Significant Others, and Moving Forward. While some of the modules were more applicable to me, I still had access to them all.

Each module has a variety of tasks, with some reading of texts, videos, and audio files. The modules focus a lot on putting “tools in your toolbox” to deal with the new life you’re now facing. Personally, I think they should have called them “skills in a sack,” but maybe their pun game isn’t as strong. Some of these tools include mindfulness, worry postponement, challenging unhelpful thoughts, and many more.

Overall, the modules were enlightening and helpful. I wish I had had some of the modules, especially “Changes,” immediately after finishing treatment. It dealt with physical changes and recovery, which is something that wasn’t as important to me seven months post-chemo. eTC Express is something I would recommend to men at any stage of their testicular cancer journey.

One thing I really liked about the program was when I was asked to respond to prompts. If you can’t tell, I enjoy writing (and it’s a strategy that’s actually included in the “toolbox”). While the ABSOT posts go through various stages of drafting, editing, revision, and publishing, it was nice to be able to just write freely and deal with my raw emotions

At one point, I had to list what’s important to me. Some things I would have definitely included prior to cancer didn’t even cross my mind, which surprised me to see in writing. Rest assured, my cat, Conner, still ranked very high on the list (see aforementioned wanting to talk to cats).

Part of eTC Express is to evaluate your levels of distress every few modules. Mine are slightly higher than normal, with my one year of diagnosis coming up. A few days after indicating this, I got an email* from Dr. Ben Smith, who is actually in a number of the videos. He reached out personally to make sure I was okay and to offer his help.

That’s probably something I should mention. This program is based in Australia and some things towards the end (regarding financial and legal business) are about Australia. I just kind of skipped through it. I really hope the Australian team does not take offense to the dingo joke I made in my cost of cancer post.

Another powerful piece of the program was the video interviews of Australian survivors. It was more than just their accents that made it compelling. (As a side note I love British, Irish, and Australian accent like most Americans. I once listened to Irish talk radio for three weeks in hopes of developing an accent. No such luck.)

There were five different guys with a total of four testicles (as far as I could tell one of them had both removed). Their stories mirrored mine – struggling with handling the transition back to work, dealing with expectations, and finding ways to restore a sense of self.

Separately, these pieces were helpful, but together they formed a basis of powerful counseling, a la a Voltron of ball-related help. Both sharing my own feelings and hearing the feelings of others helped to push me in the right direction.

Module Six, Moving Forward, was my personal favorite. That’s the point I’m in now – needing to move forward but not feeling sure of where to go. I’ve been grappling with this notion that cancer was a terrible thing, but also a great thing for me, in an odd way. This module specifically touched on it, which made me feel like I’m not alone in that reaction.

Two quotes from this module really resonated with me. “It’s reshaping what you think is normal” completely encapsulates my current mantra. My life is different than it was before cancer and is different than it would be if I hadn’t ever been diagnosed. I had terrible work-life balance before and no clearly defined goals. Cancer helped show me the error of my ways and what’s important.

While this does not mean I need to get a prosthetic testicle (especially since they don’t make BB-8 shaped ones), I’ve found ways to improve my life to make up what I no longer have. I lost a friend, but found a community of support. I lost time, but I’m making up for it tenfold. And even though I lost hair, it grew it back (and got some sweet hats in the meantime).

eTC Express was exactly what I needed. While I wasn’t sharing my personal feelings to a living human while awkwardly lounging on a couch, the words and the testimonials from the other survivors articulated what I was feeling. If you’re at a loss for a therapy program and don’t think traditional therapy will work for you, I recommend you give this a shot.

However, if you get to the module that asks, “Shall we play a game?,” you should probably take a day off.**

**for those of you counting, that’s two Matthew Broderick references in one sentence.