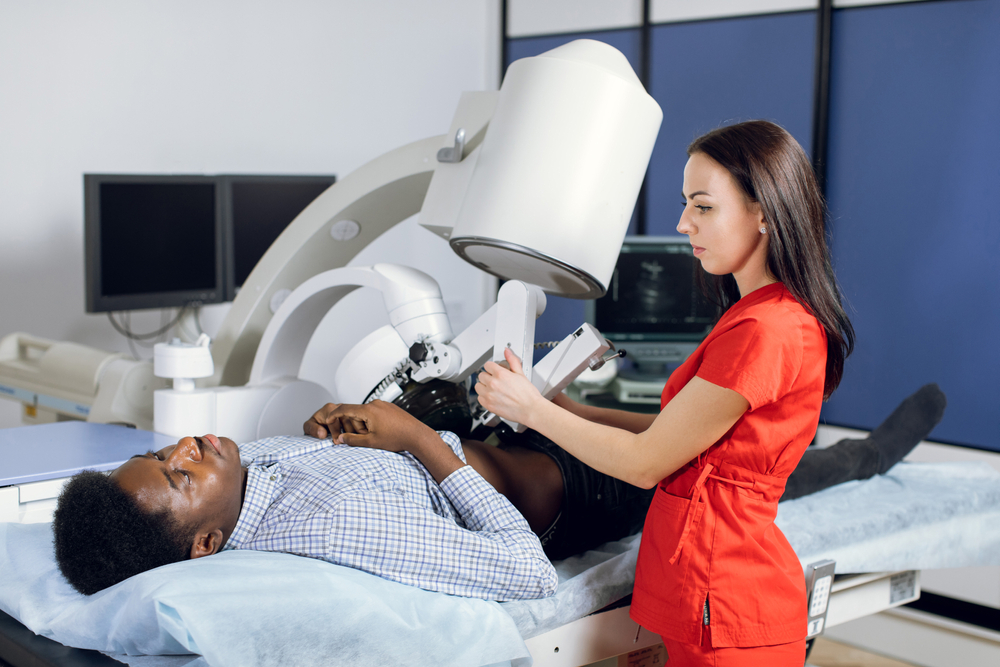 (UroToday.com) Saturday morning plenaries at the 2022 AUA Annual Meeting included a fascinating lecture illustrating how to handle some of urology’s most difficult and shocking complications. The presentation took some of the “horror” stories of urologic surgery and discussed how to steer clear and to deal with the toughest situations. Presenters Dr. Randall Meacham MD, Dr. Tobias Kholer MD, Dr. Lindsay Hampson MD, Dr. Brian Cross MD and Dr. Rene Sotelo MD shared details of managing their specific cases as well as general wisdom for facing challenging situations in on the OR.

Dr. Kholer started the session off with a case involving a 27-year-old male with severe erectile dysfunction completely non-responsive to medical therapy with a complicated medical history including type 1 diabetes, an NSTEMI, severe peripheral arterial disease, and hyperlipidemia with multiple procedures to manage his vasculopathy conditions. He came to the clinic with a goal of fertility with his spouse. Given his contraindications for PDE5I medications (taking nitrates) and failed injection therapy, along with his severe vascular condition, placement of an implantable penile prosthesis (IPP) were entertained. Discussions included the primary care, cardiology, and thrombophilia clinic and evaluation included a negative ECHO/EKG stress test, and a decision to continue he current blood thinning medications Aspirin a Plavix while bridging coumadin with enoxaparin. The surgery was and uneventful 45-minute case. 8 hours after the case, the patient presented with a dusky glans, pain and swelling.

The Device was explanted, and within 24 hours the penile tissue looked heathy and the patient had a full recover.

13 months later IPP reimplantation was attempted, but with a narrower device, and smaller caliber catheter postoperatively. Unfortunately, the patient returned 6 weeks later with a terrible infection and the implant was again explanted, with good resolution of infection. 1 year later the Dr. Kholer notice this individual on his clinic schedule. He assumed it meant trouble, and he was prepared for the worst he was genuinely worried about how he would navigate the expectations and potential frustrations of this man. He thought, “maybe a malleable implant. Stay positive. be encouraging and realistic, expect [them] to express their frustration.” So, when the time came, he opens the exam room door, and there sit this elated young man with his wife saying, “Doctor, we just wanted to meet with you, thank you for all of your help and show you our new baby.” Now, at this point in the presentation, one could sense all the puzzled brows filling the plenary hall. The patient then begins to thank Dr. Kholer for making this possible and explains that ever since recovering from the 2 penile explants, his penis had been firm enough for penetrative sex. Dr. Kholer exclaimed, “So from so much scar tissue from all the damage from all the havoc we had wreaked on this man’s penis..” the room burst into laughter with healthy applause. Dr. Kholer did not take credit for the marvelous results but rather shared some wisdom regarding managing IPP complications. Throughout his presentation were a healthy dose of clinical pearls for managing risk and avoiding complications including dealing with anticoagulation medication, diabetes, explaining risks and facing the hard realities of lowering success rates with repeated implantation procedures.

Dr. Brian Cross presented a case of an 80-year-old female with new diagnosis of muscle-invasive bladder cancer and a history of hysterectomy in 1972. After cystectomy, the patient appeared to be recovering well for the first several weeks but presented to the ER roughly 4 weeks later reporting several days of pelvic pressure and a sudden “bowel movement” early that day. On exam, a large amount of large bowel was found dangling from the vaginal canal.

She was taken urgently to the OR for laparotomy, and was found to have a massive vaginal dehiscence with evisceration of 100 cm of small bowel. After a difficult surgery involving general surgery and Urology, the bowel contents were reduced with a resection and anastomosis of some ischemic small bowel, and the vaginal cuff was closed with interrupted 0-vicryl and omental flap interposition to reinforce the area. Her postoperative course was unremarkable and she was discharged 2 days after surgery. Dr. Cross then presented research on female organ sparing cystectomy that included 481 cases, 20% of which had vaginal complication within 2 years with up to 10% of those involving vaginal dehiscence. For major take-home points he stated: most postoperative abdominal complications can be managed by the urologist, consider adjunct supportive measures if resection of the vagina is necessary, don’t assume older female cystectomy patients aren’t sexually active, consider female organ-sparing surgery if ontologically sound. In closing he remarked that dealing with complications is stressful, especially early in one’s career. He emphasized the importance of setting expectations and discussing risks with patients in the clinic. He closed with a reminder to focus on what is important, to remember surgery is a difficult job, and to support one another as we manage tough cases.

Dr. Lindsay Hampson discussed a difficult case involving a 49-year-old woman with a history of cloacal anatomy, neurogenic bladder with a surgically closed bladder neck, ileal bladder augmentation, and a catheterize channel to the umbilicus, and end stage renal disease with bilateral nephrectomy and right lower quadrant kidney transplant. This patient had a 10-year history of intermittent self-catheterization through the channel open in the umbilicus and woke up one day to find she could not pass the catheter. She made multiple attempts through the morning as her bladder became more distended and she became more panicked. She presented to the urologist’s office in tears, obviously uncomfortable. After unsuccessful attempts by both the nurse and the MD to place the catheter (including attempts with a wire), percutaneous access was obtained in the clinic with an 18Fr needle under ultrasound guidance. A distended bladder with safe window was located with no bowel visualized. Once a 5 Fr catheter was placed, there was significant relief and urine drained, and she was sent to Interventional Radiology for placement of a suprapubic tube to replace the 5 Fr catheter. A visit was then scheduled for suprapubic tube change and discussion of tract management, but while waiting for the visit the patient suffered a VRE urinary tract infection, and developed nausea and abdominal pain a few days prior to the clinic visit and was seen in the ED with elevated potassium, normal kidney function. The existing tube was wired, and a new silicone catheter was easily placed alongside the wire and upon irrigation, there was seen…. pieces of lettuce! A cope tube was place over the wire with irrigation which returned urine and mucus, no lettuce. So, a CT scan was obtained showing the catheter passing through bowel before entering into the bladder.

After explorative surgery with urology and general surgery, it was confirmed that the tube was traversing 2 loops of bowel and into the bladder. The bowel was resected and anastomosed, the bladder defect was patched. Upon later evaluation of the initial tract opening into the umbilicus, a scope revealed a patent tract with a diverticulum likely the cause of the inability to initially self-catheterize. Dr. Hampson gave some poignant take-homes from this case: even in large distended bladders, suprapubic percutaneous access is safest closer to the pubis, and a reminder that acuity can cause us to act before we’ve taken time to step back and analyze the situation. She also gave a reminder that in those that have had pelvic/abdominal surgery, fibrosis can obstruct the ultrasonic view.

Dr. Rene Sotelo closed the session with a two-case involving incidental transection of the superior mesenteric artery while performing left nephrectomy. In both cases he showed video how during the surgical approach the superior mesenteric artery can be confused for the renal artery and accidentally transected. In the first case, what was thought to be the renal artery was found, anterior to the renal vein, and then transected. The renal vein was subsequently transected and another artery was located posterior to the renal vein. He then begins a discussion of how one might postoperative discover this error and how in the next 24 hours the patient may present with abdominal pain, guarding, rigidity, rebound tenderness, nausea, vomiting, metabolic acidosis, increase in lactic acid, and septic shock. He made the point that the chances of a 2 renal artery anterior to the renal vein are rare, and so any artery found there is something else until proven otherwise. He shared the important point that when an incidental transection of the SMA occurs, it is important to recognize and intraoperatively and get the appropriate help. One way this can be noticed is if the renal vein remains distended after placing a clip on the renal artery, it may be that you don’t have the correct vessel. In the second case he demonstrated a surgical video where the incorrectly clipped SMA was unclipped, dissection was broadened closer to the aorta and the renal hilum, and the correct vessels were identified and transected. The main take-home message: if an artery sits anterior to the renal vein, or if you find a suspected 2 renal artery, it is important to confirm it is not the SMA. If the SMA is incidentally clipped or transected, get immediately intraoperative help from vascular surgery.

The session was an inspiring demonstration of the resilience, resourcefulness, and self-reflection needed to deal with complications, difficult cases, and accidents. Closing remarks included comments about reaching out to collages to both receive and offer support when complications happen.